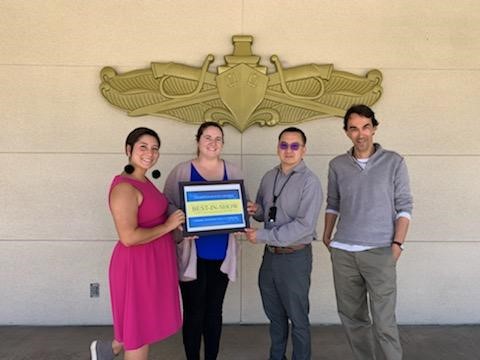 PRSA honors outstanding contributions to the public relations profession. The Silver Anvil Award symbolizes the forging of public opinion and is awarded annually to organizations that have addressed challenging issues. CNSP won the award for Crisis Communications for their entry on the USS Bonhomme Richard (LHD 6) Fire Crisis Response! The entire team was in the trenches with the client and on the waterfront helping to control the narrative and give updates on the crisis. Richard Engle, Richard Go (kglobal), and Samantha Law (kglobal) made a banner on the public website that announced all updated information on the status of the fire. Nick Groesch designed and edited videos and graphics to highlight the firefighters, both military and civilian. Victoria Ochoa (kglobal) and Karli Yeager hosted livestreamed press conferences and manned the Surface Warriors social media accounts. Karli also completed a media analysis during and after the fire, and created the awards package.